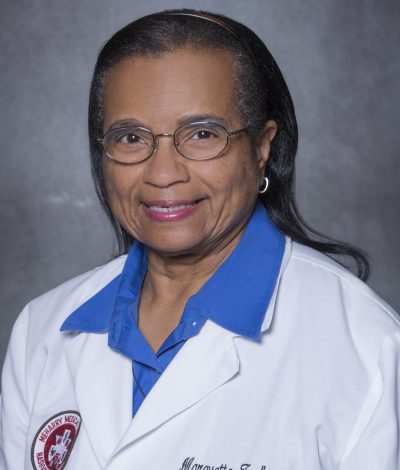 Dr. Marquetta Faulkner is a nephrologist at Meharry Medical Group.

Dr. Faulkner received her medical degree from Meharry Medical College in 1981.  She completed her internal medicine residency and nephrology fellowship at Long Island Jewish Medical Center in New Hyde Park, N.Y. in 1989.  In December 2006, she earned the Physicians’ Executive Master of Business Administration (MBA) degree from the University of Tennessee-Knoxville.

Dr. Faulkner began her career as an assistant professor and Nephrologist in the Department of Internal Medicine at Meharry in 1989.  She was promoted to full Professor with tenure in the Department of Internal Medicine in 2004. She is former chair of the Continuous Quality Improvement Committee and the Credentialing Committee for Meharry Medical Group. She is also former Dean and Senior Vice President for Health Affairs at Meharry Medical College.

As a clinical researcher and scholar, Dr. Faulkner has been extremely active in research projects with numerous associated publications and manuscripts. She has served as principal investigator for several research studies, including the NIH sponsored African American Study in Kidney Disease (AASK).

As a clinician, Dr. Faulkner is known for providing thorough treatment of kidney disease.